Normally a web application should identify a logged in user by data which is stored on the server side in some kind of session storage. However, in web application audits someone can often observe that internal user identifiers are transmitted in HTTP requests as parameters or cookies. Applications which trust identity information provided by the client can be vulnerable to privilege escalation attacks. Finding all occurrences of identity data transmissions can be quite straining, especially if this information is sent in different parameters, among other information or only in particular requests.

The motivation behind the Burp SessionAuth extension was to support the web application auditor in finding such cases of privilege escalation vulnerabilities. The idea is, that the auditor provides some information, internal identifiers and strings which identify different users (e.g. his/her real name) or content. The extension performs the following tasks:

Please be aware that this piece of software is still very experimental!

A proper configuration of the extension is very important. It's useless without providing some data to it! If you observe the usage of identifiers (numeric etc.) for user accounts or are in the lucky position, that such identifiers are provided to you in an audit, then you should enter such information in the extension configuration.

The extension provides a suite tab in Burp named "SessionAuth" which contains a table with already entered identifier/content-pairs and the possibility to add such pairs by entering them manually.

For convenience there is a possibility to provide such pairs directly from requests or responses by marking the particular text and invocation of the context menu. Before the first addition the context menu contains only an item to add the marked text as identifier. After this has been invoked, another menu item offers to add the marked text as content to the last added identifier.

Generally the roles of the both values in a pair are as follows:

After the first identifier is added, the extension starts to examine each request sent through the Burp proxy with a passive scan. Each occurrence of the identifier in a request results in a scanner issue in the Scanner/Results-tab of Burp. The title is "Object Identifier found in Parameter Value". Severity is determined as follows:

Confidence is determined as follows:

The passive scan issues generated by the extension help the auditor to identify interesting request candidates for privilege escalation vulnerabilities. They should be reviewed manually and further tests should be performed on them.

For each request which contains at least one identifier the extension adds a context menu item, "Send to Intruder and preconfigure id injection points", which sends the request to Burp Intruder and sets appropriate injection points at the locations of the found identifiers. Another feature is a payload generator, which outputs the identifiers given in the SessionAuth tab: 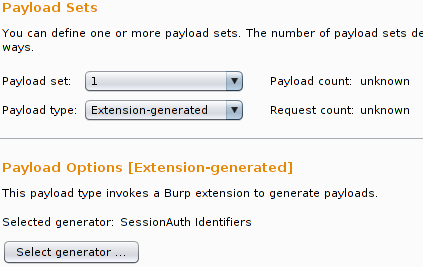 If you send a request to Intruder by the extensions context menu item, the payload is not preconfigured, because there is no possibility in the API which allows this setting to be performed from an extension. An enhancement request is pending. However, you can configure a template in the first/last Intruder tab and use it as default for new Intruder tabs in the usual way.

This supports you manually in verifying what happens if an identifier is replaced by another one in a request. Generally such identifiers are also interesting targets for injection attacks, because they are used to refer users in some kind of backend data store like an SQL or LDAP database. If you have only one identifier while an audit, increasing/decreasing it is also a good try. Live out your creativity, but always keep in mind: respect the privacy of others and disclose found vulnerabilities responsible!

This is the part of the software which tries to identify privilege escalation vulnerabilities automatically with some heuristics derived from some years of web application audit experience. If you're in hurry, you possibly would find something you would have overseen or you can perform a preflight before doing the manual part. My recommendation will always be: don't rely only on automatic scans! Serious (web) application audits are mainly based on manual work and not on results of automated scans. This applies especially to vulnerabilities addressed by this extension, which are often subtle to find.

The active scan replaces identifiers found in the request sequentially with all other identifiers and reissues the request. Then the resulting response is compared against the base response. In the current version the occurrence of content values corresponding to the identifiers is counted and the count is matched. Most important cases are:

All active scan issues contain the base and scan request/response pair. Burp automatically adds a button for comparison of both responses.

Complicated? Maybe a bit ;-) I think there is much room for improvement. The following picture shows all issue types: 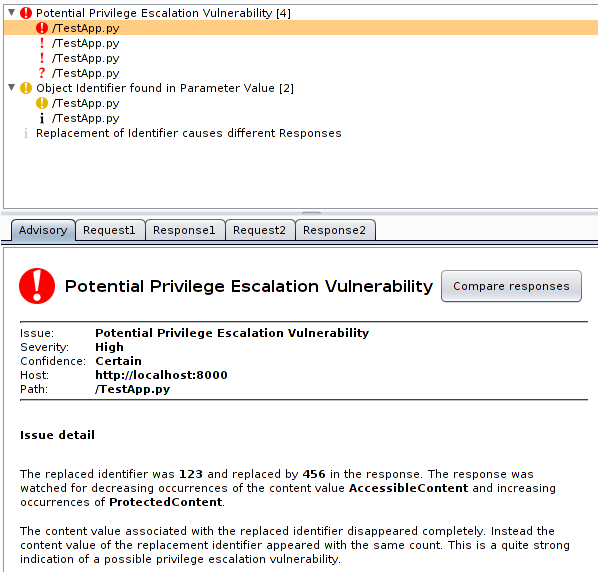 Usage There are other use possible use cases. E.g. imagine a web application which stores content or documents which must not be accessible by all users. Add the identifier of an object where access by the current audit user is allowed and another one of an object where the user is not allowed to access. Furthermore add a part from the content as content value. From this point the extension will watch the requests for occurrences of the identifiers and can be used to perform the usual replacement tests automatically.

So you think the Burp SessionAuth extension could be useful for you? Then get it, use it and if you have ideas and time, feel free to improve it! Be aware: it could be buggy and mess up your Burp sessions!

Get it at GitHub.

On GitHub you will also see a long ToDo list with functionality I plan to implement in the future. Feel free to fork and implement them on your own or implement own cool ideas. It's free software! You can also ping me by mail, Twitter or however to check if the feature is not already finished on my hard disk. I'm quite defensive in publishing unfinished stuff ;-)

The best place for reporting bugs is the GitHub issue tracker, to keep everything at a central place. But you can also send mails to me.